Launch! and the Mission

I dedicate my efforts during this mission to the memory of my father, Mr. Kong Ming Cheung. It is because of my parents' urging that I have achieved the educational goals needed to be an effective member of this team. 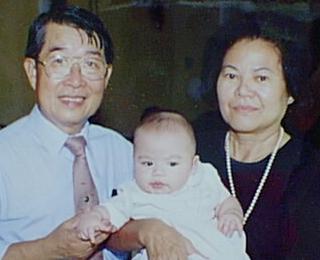 My parents holding Christopher at his christening.
After the HOST Controller was completed and delivered for installation on the cradle in Feb. 1998, I was reassigned to a different part of the HOST mission due to my track record with the Controller. I started working on the NICMOS Cooling System (NCS) as one of the System engineers. As explained earlier, the NCS is a cryogenic refrigerator. It was behind schedule due to numerous rebuilds of the mechanical hardware. The NCS is a large system that has many complicated parts and components. There are mechanical, electrical, contamination and system engineers that work on the cooler. Although it was very close and we had to work long hours, we were able to prepare it in time to be included into the HOST mission.


Weather on the day of the launch was absolutely perfect for viewing. There wasn't a cloud in the sky, and very little haze. In fact, I was able to follow the orbiter with my binoculars well past Solid Rocket Booster separation. At the end, the orbiter's engines were visible as a bright dot, while the fading SRB's were two fainter dots. The sound was a loud rumbling and crackling roar.

My wife, children and sister-in-law at the launch site. Full Size.


One of the nicest aspects was that I was able to witness the launch with my wife, two children, mother, uncle, aunt, my brother, my sister-in-law and hundreds of other HOST team members and their family. HST chartered several buses to transport the hundreds of people in our group.

Design on the HOST Team Shirt. The lettering near the bottom reads:
HST Orbital Systems Test (HOST) provides an on-orbit test bed for new
and advanced technologies for the Hubble Space Telescope.
Design by Space Shirts.

During the mission, I will be the main liaison between the Mission Operations Manager (known as the MOM) and the staff on hand for the NCS. Along with my shift counterpart (we will be working two twelve hours shifts) we are responsible for quickly diagnosing problems and coordinating the actions of the NCS team to solve them.

In the HOST Control Room at KSC. Normal size

Astronaut Steve Lindsey operating the PGSE computer that
I carried in during my crew cabin visit. This computer
communicates with my HOST Controller.

On console in our control room at KSC. Sitting next to me is Marc Kaylor from
Swales Aerospace. Judy Gibbon from NASA is just visible behind me.Other view


The NCS area in our control center is shown above. Note that I am the second person on the left. Sitting on my left is Marc Kaylor, who is one of the Principal Investigators (PI) of the Radiator. Then to my right are Greg Nellis and Jeff Breedlove from Creare, who are two of the PI's on the mechanical cooler. In the back of them is Judy Gibbons, who is one of the other system engineers. Note also the following in the picture (full size version may be clearer): During the mission, all the hardware worked extremely well. The HOST Controller had almost no problems (small exception mentioned below). My fears of ruining the mission because the Controller would not receive commands were unfounded. Since the Controller was the only command and data link to the ground, the loss of the Controller would mean the loss of the HOST mission. The HST486 functioned without radiation effects. The SSR experienced the same type of radiation hits like the one in the Hubble Space Telescope, which was an expected result. The NCS turbomachines started up and ran well.

The only problem we had was that the prediction of the thermal engineers of an average temperature of -10C was incorrect. During the mission, we were much warmer, perhaps by 30 degrees. This was because another instrument in a nearby cradle (IEH) required lengthy sun pointing to accomplish its science objectives. Since I did not intend the Controller to be run this warm, this resulted in a potential shut down of the HOST Controller by around day seven. This would mean a total shutdown of the whole cradle since we would not be able to get any commands or data from the instruments. Fortunately, this was not necessary and we did not lose valuable mission time.

Another impact of the warm attitude was that the NCS could not run at peak efficiency, and we did not achieve our low temperature goal of 72K (72 degrees above absolute zero). We did instead achieve a low temp of 72.64K. This was judged to be sufficient.

Here are two cartoons from Mission Control at
Johnson Space Center that were sent around at the end of the mission:

Caption reads : KSC practical jokers prepare for STS-95 landing.
Explanation : In the sci-fi movie 'Planet of the Apes', when humans landed
on the planet, the Statue of Liberty had been buried in the sand.

First cel: Wanna see something weird?
Second cel: First, I place a piece of HOST equipment into the Orbiter.. (toaster reads:HOST A MATIC).
Third cel: ...Then I open the PLB (Pay Load Bay) Doors and wait two minutes! Ding!
Fourth cel: What happens to Spartan and IEH? They experience secondary thermal impacts.
Explanation: The Shuttle is the HOST A MATIC. It is so warm that it makes toast
out of our hardware. The other cradles (Spartan and IEH) experience impacts
on their science schedule because we are always asking for cooler orbits.
This cartoon was on the cover of the 'STS-95 Execute Package' for flight
day 09 issued by the Flight Activities Officer at the Johnson Space Center.